*Please note that newer entries for my personal blog are published in reverse order (newer posts are published at a later date), so that the true story of my family can be told in chronological order. The real date of this post is October 31th, 2011*

To no surprise, I did not sleep well that night … it didn’t seem to help the fact that I had to go to work on that next day. I remember going through the motions of my daily routine and going to the office. Everything felt so surreal almost like I was living a really bad dream. Walking around like a zombie with a numbness crawling up my brain and down my fingertips. Just waiting … or rather, hoping for someone – anyone to pinch me and wake me up.  All I could think of was getting through the day so that I could go over to Children’s Hospital after work to see my baby girl.

By the time I got out, it was a little past 7 o’clock. My wife had called me; she was in pain from her cesarean and wanted me to come see her at Huntington Memorial. So I quickly jumped into the car and drove straight to the hospital. I arrived to see my wife in bed, looking very haggardly – I’m sure my tired body didn’t look much better. She was in pain and had a hard time trying to do daily activities. The nurses at this so called 5 star hospital were of little help – they would make my wife try and do things on her own, even though every step she took her stitches would open and fluid would hemorrhage out of her incision. I remember my wife looking at me- we were both really tired, I was torn between leaving my wife alone here and running off to see my sick daughter. I could tell my wife was concerned with how tired I was and afraid that I would fall asleep and get in a car accident on the way to see my daughter. I called the cardiothoracic intensive care unit and children’s hospital in Los Angeles.  The nurse there said Hanna was stable and that my sisters and mother had visited her that day. I think the nurse could tell how tired I was; she recommended that perhaps it would be better that I came early in the morning since it was already getting late. I finally succumbed to my weariness and the advice of my wife and the nurse, I would get some rest that evening and head out early morning to see Hanna.

I was up early the next day. Had some breakfast at the hospital, made sure my wife was okay and was off to Children’s Hospital LA. Upon arriving at the hospital, I checked in at the front and had them look up where my daughter was. The receptionist said she was in CTICU and made a call up there to verify that I was authorized to go up. Apparently they only allow 2 people up in that unit. Once I got the okay, I walked through and up the elevator. The place was rather large, lots of signs and different departments. There were many pictures on the wall with children experiencing various congenital heart problems. They had their birth dates … and their demise date. Some only lived a few weeks, many only a few years and others passed away at their teenage years. I could feel a pit starting to form in my stomach and refused to read any further. I immediately went up to the cardiology department counter and asked to see my daughter. They asked me to wait in the waiting area because one of the cardiology specialists wanted to speak with me.

Fifteen minutes later, I was escorted into one of the exam rooms to the side and met with Dr. Ahdoot. He was very patient with my flurry of questions. Currently Hanna was on PGE1 to keep her PDA open and she was on back up life support. Normally he would not have gone into so much detail because most parents would not understand the extensiveness of the surgeries and or the complications of my daughter’s heart condition: http://www.thic.com/hyporight.htm

Once I understood the severity and risks of my daughters defect, everything that I experienced from the past few days finally crushed me like a ton of bricks. I could not bear the weight and ramifications of my daughter’s condition … of the fact that our daughter may not live past her first surgery … and that IF she survived the first, there would be many more major surgeries to follow … after which I feared she would never be that healthy, bright and happy girl that I had always imagined. I kept thinking how it was so terribly unfair for a parent to out live their child. Unable to hold back the wave of emotions, I crumbled down, a flood of tears washed down my face as I somberly cried for perhaps the first time in 18 years.

Dr. Ahdoot handed me some tissue and offered some words of encouragement. He told me a story about a good friend of his, who was also a pediatric cardiologist. That doctor was born with a similar congenital heart defect. His friend was in his late forties and continues to treat children with similar congenital heart defects like Hanna’s. He also pulled out a picture in his email, showing a family who moved up North, who had a daughter also with a similar heart defect. She was currently doing well at the age of seven. More importantly he showed me that the couple had three other healthy children in their family. I realized that life still goes on and that there was still hope for my daughter.

After my meeting with Dr. Ahdoot, I was then escorted to CTICU to the room where Hanna was resting … 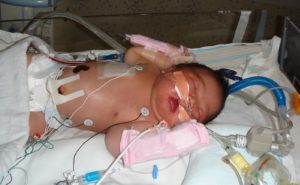