*Please note that newer entries for my personal blog are published in reverse order (newer posts are published at a later date), so that the true story of my family can be told in chronological order. The real date of this post is August 16th, 2011*

After getting off the phone with my wife, I had my patients cancelled for the rest of that Tuesday and all of the next day, Wednesday. I let my office manager know to keep the Thursday scheduled for our patients in order to offset for the other closed days. I then headed straight home to pick up the over-night hospital bags for my wife and myself.

That late afternoon on Tuesday, I was finally at my wife’s bedside. I remember stepping into her labor room for the first time and seeing her in her light blue hospital nighty sitting on her bed wrapped in a blanket, watching TV. Something about that moment still sticks with me. Her skin had a golden shine and face was beaming – delighted that I was finally here. I felt relieved and happy that she was doing “okay” and that we were finally getting ready for that big day at the hospital. I walked over to her bed gave her a light kiss on the cheek and sat next to her.

After about 14 hours of labor, my wife was still only 3 centimeters dilated. Her doctor informed us, that it would be at least another 9 hours before she would be dilated enough to give birth. Because of the pain from her contractions, my wife asked for an epidural so that she could get some rest. I could still remember the hospital recliner that I was trying to sleep/rest in next to my wife. You would think that for $10,000 a night, such a highly rated five star hospital  would be able to provide more comfortable accommodations. Let’s just say I think I’ve slept better in my college years on the floor of the bathroom next to a toilet after a USC party.

I think my wife could hear me tossing and turning. At around 3:30 am, I remember her opening her tired eyes and telling me to just go home for a few hours to get some rest so that I could be back bright and early. Knowing that I would need my strength and not really wanting to argue with my wife, I somehow made it back home around 4 a.m. As soon as I got home, I hit the shower and fell flat on my bed asleep.

I woke up around 6:30 a.m. to the sounds of my dog barking. Mochi, my shit-poo dog (Shihtzu/Poodle) was pretty angry because I had forgot to feed and give her water the night before. Somehow that didn’t stop her from laying a nice large dark pickle in the hallway. I quickly cleaned up her mess and gave her enough food and liquids to last the next few days. Moments later, I rushed back to the hospital. 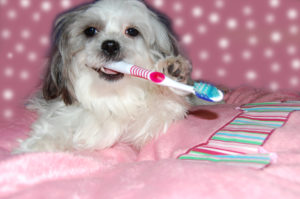 When I arrived at the Huntington Memorial Hospital, my wife didn’t look so great, She looked very pale and her eyes were blood shot – yet she still managed a weak smile as I entered her room. The pitocin didn’t seem to be helping her dilate – she was at around 5 centimeters dilated after about 21 hours of labor. In order to try to induce the dilation further we walked around the hospital so many times, that I became an expert at counting the number of dings and cracks on the hallway walls – 92 not including the dark scuff marks which would put it at 112.

After about 25 hours of labor, our doctor informed us that my wife was still only 5 centimeters dilated and would therefore have to go through a caesarean. At that point my wife received her 2nd epidural in preparation for surgery. Just as we finished packing up our things and was ready to check-into the surgery room, the head nurse came in and said all the surgery rooms were full and that we would have to wait till one was available. Two hours later, we were informed again that a room was still not available. To this day I’m not sure why they didn’t let us know earlier, so that my wife could at least rest on her hospital bed. My nine months pregnant wife was about to burst and basically had to stand around or sit on the edge of the chair because we had to be ready at the snap of the fingers, to admit her into surgery. I kept thinking in my head at that time that we had done our research and Huntington Memorial was one of the highest rated hospitals in our area – it was hard to imagine how it could have been worse at any other hospital. My train of thought was broken when the nurse finally came in and said a surgery suite was available … my wife had suffered another 3 hours of labor waiting for that room, putting the grand total at 28 hours of labor.