For over a century, we as dentists have used various different materials to take molds (impressions) of the hard and soft tissue in the oral cavity. Many patients had no choice but to put up with it, while others suffered through gagging or left with a snack – otherwise known as extra dental fluff in their mouth. Advances in dental technology came out with other ways of doing these impressions digitally- one of the first was Sirona CEREC. Some brave dentists immediately jumped on board thinking it was the greatest thing since sliced bread. These advanced machines were used to create dental restorations, such as crowns without the use of that dental “GOOP” abhorred by so many patients. I held back during that time, because I did not want to be the first to experiment with this technology without seeing a reliable track record. Not long after, a major flaw was soon discovered…These machines were not as accurate as the dental “GOOP” or standard PVS impression material, causing many patients to return to those dental offices with inadequate dental restorations, such as leaky margins or recurrent decay. Years passed by and the technology gradually improved to the point where certain companies were able to dramatically improve the accuracy. The American Dental Association recently published an unbiased study showing the following: 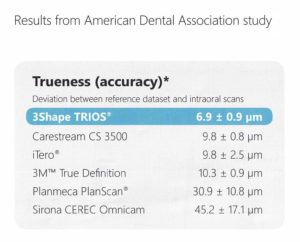 I realized why so many patient’s complained about having problems with other dental offices who do “Same Day Crowns” by Sirona CEREC in their own office. These Sirona CEREC machines used to take digital impressions and mill dental restorations such as crowns were faulty because their accuracy were the worst out of the six main intraoral scanners on the market. The accuracy of CEREC is even worse than than the best dental “GOOP” PVS impression, which has an accuracy of 10-20 µm (microns). After review of the ADA literature, obviously one digital scanner stood out: 3Shape TRIOS. Not one wanting to base my knowledge on just one study, I dived deeper and found that study after study the 3Shape always came out on top. A few months later, we purchased the 3Shape TRIOS Cart in August of 2017 and many patients were ecstatic. Having the most advanced/accurate digital scanner in the world, we try and use it for most of our dental and medical procedures today. However there are times when we have to go back to the standard dental “GOOP” material because of difficulty accessing the area and or distortions due to contaminants such as oral debris and bodily fluids. 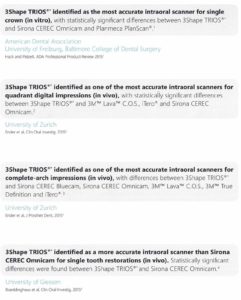 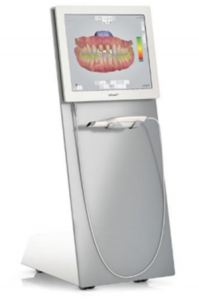