What is Root Canal Therapy?

Root canal therapy is needed when the nerve of a tooth becomes inflamed or infected. Possible causes of these symptoms include deep decay, leaky crowns, cracked teeth, and severe physical trauma to the tooth. In order to save the tooth, the pulp (the living tissue inside the tooth), nerves, bacteria, and any decay are removed. The resulting space is filled with a special medicated dental material called “gutta-percha.”

Having a root canal done on a tooth is the treatment of choice to save a tooth that otherwise would die and have to be removed.  Many patients believe that removing a tooth that has problems is the solution, but what is not realized is that extracting (pulling) a tooth will ultimately be more costly and cause significant problems for adjacent teeth.

Root canal therapy and treatment is highly successful and usually lasts a lifetime, although on occasion, a tooth will have to be retreated due to new infections.

What does root canal therapy involve?

A root canal procedure requires one or more appointments and can be performed by a dentist or endodontist (a root canal specialist).

While the tooth is numb, an access opening is made on top of the tooth and a series of root canal files are placed into the opening, one at a time, removing the pulp, nerve tissue, and bacteria.  If tooth decay is present, it will also be removed with special dental instruments. Special medication will then be used to disinfect and dissolve any remaining bacteria in the tooth. Next, the roots and the inside space of the tooth will be filled and sealed with special dental materials called “gutta-percha.”

Once the tooth is thoroughly cleaned, it will be sealed with a temporary filling.

At the next appointment, usually a week later, a filling may be placed to cover the opening on top of the tooth.  In many cases, a filling will not be able to restore a tooth that has undergone root canal treatment (RCT). Most teeth that have had RCT will require either a core-build-up or a post to fill in and support the internal of the tooth. Once the internal structure of the tooth is complete, a crown (cap) is then placed.  This will protect the tooth, prevent it from breaking, and restore it to its full function.

After root canal treatment, the tooth may still be sensitive, but this will subside as the inflammation diminishes and the tooth has healed. 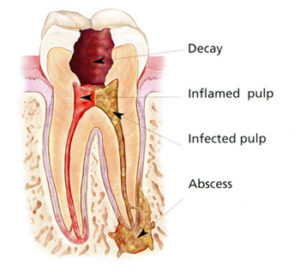